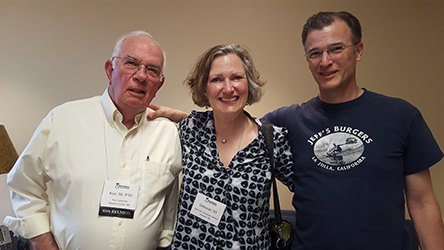 In this oral history, Ken Carpenter (Class of 1958), Deborah Carpenter Jenson (Class of 1983), and Jim Jenson (Class of 1982) reflect on their respective experiences at Bowdoin. Ken speaks of his background as an “orphan” (his father had died and his mother could not afford to raise him) attending Girard College for Boys, his transition to Bowdoin life as a first-generation student, and his involvement with the Delta Sigma fraternity. He also explores how the research skills that he gained at Bowdoin influenced his career as a cataloger, librarian, and author. Ken and his daughter, Deborah, go on to explain that, during his time at Bowdoin, Ken met his future wife, Mary Carpenter, at a boarding house in Brunswick run by Mary’s mother, Elizabeth Wilson. They later explain that Mary Carpenter had also lost her father and that Mary’s subsequent career in academia influenced Deborah’s career path. Deborah also recounts the factors that affected her decision to attend Bowdoin, as well as a hazing story from her early days at Delta Kappa Epsilon. Jim tells of his decision to enroll at the College, his transition from California to Maine, and his experience in the Theta Delta Chi fraternity. The three also discuss their thoughts on Bowdoin’s decision to eliminate fraternities.