Interview with Nicholas Lewis (Class of 1974) by Emma Kellogg 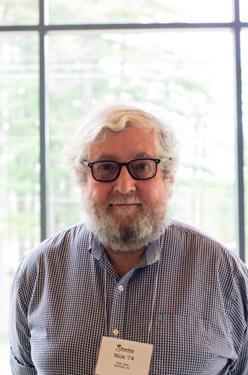 Nicholas “Nick” Lewis (Class of 1974) discusses arriving at Bowdoin sight-unseen and adjusting to life at a rural, all-male college. He describes the atmosphere of Hyde Hall during his first year and the “crazed” drug and alcohol usage on campus. He reminisces about his deep involvement in theater, a passion he pursued throughout a yearlong study-away experience. Lewis speaks about the transition towards coeducation, which occurred during his sophomore year, and the resulting changes he felt on campus. He comments on his fraternity, Alpha Rho Upsilon as well as the effects of the Greek system on Bowdoin more broadly. Lewis remembers his class’s year-end festival The Carnival of the New World and the eclectic musical concerts of Professor Elliott Schwartz.